In our first post, we presented a summary of our good-case latency results for Byzantine broadcast (BB) and state machine replication (SMR), where the good case measures the latency to commit given that the broadcaster or leader is honest. In our second post, we discussed our results for partial synchrony, and described a new BFT SMR protocol named (5f-1)-SMR that can commit a decision within $2$ rounds in the good case and only requires $n\geq 5f-1$ replicas. In this third post, we highlight some of our results for synchrony, and provide intuition on how they improve the current best solutions.

Synchronous BFT SMR has received significant attention due to its $f<n/2$ resilience, in contrast to the $f<n/3$ resilience for partially synchronous BFT SMR. There has been a sequence of work focusing on developing latency efficient BFT SMR protocol under synchrony. The state-of-the-art synchronous BFT SMR is Sync HotStuff with a good-case latency of $2\Delta +\delta$, where $\Delta$ is the assumed upper bound for network delay and $\delta\ll\Delta$ is the actual network delay. In this post, we show how to reduce the $2\Delta+\delta$ latency to $\Delta+2\delta$ for BFT SMR, and further improve it to the optimal $\Delta+1.5\delta$ for Byzantine broadcast.

This post describes Sync HotStuff, so we will just briefly recap here. The steady-state of the protocol works as follows:

The good-case latency of the protocol is $2\Delta+\delta$, since the proposal from the leader reaches all parties within $\delta$, and parties wait for $2\Delta$ before commit.

Intuition. Sync HotStuff uses a $2\Delta$ time to detect if the leader equivocated, and commit after $2\Delta$ if the party detects no equivocation. The time $2\Delta$ is sufficient: Suppose any party receives $v$ from the leader at time $t$ and commit $v$ at time $t+2\Delta$. The forwarded proposal will reach all honest parties within time $t+\Delta$. All honest parties will vote if they did not receive any conflicting value, and the value will be certified. Otherwise, if any honest party receives a conflicting value $v’$ before $t+\Delta$, the forwarded proposal of $v’$ will reach the first honest party before time $t+2\Delta$, and prevents it from committing $v$. Since the propose message may take time $\delta$ from the leader to all parties, the overall latency is $2\Delta +\delta$.

Our $1\Delta$-SMR protocol improves the good-case latency of Sync HotStuff to $\Delta+2\delta$, by reducing the above equivocation detection time from $2\Delta$ to $\Delta$. The steady-state of our protocol works as follows:

The good-case latency of the protocol is $\Delta+2\delta$, since it takes $\delta$ to receive from the leader, $\Delta$ to detect equivocation, and $\delta$ to exchange votes. 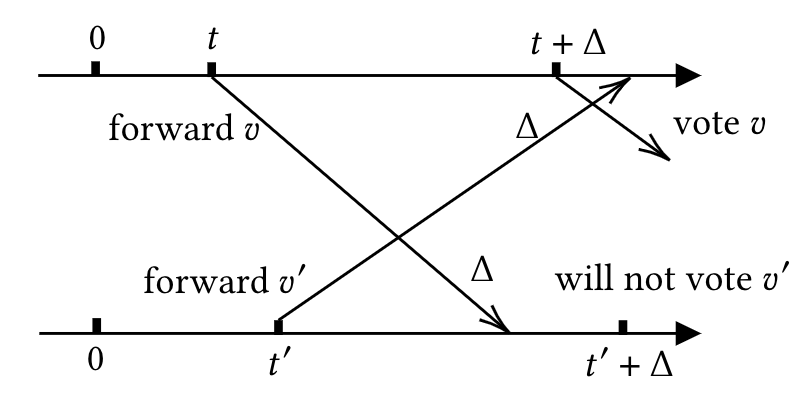 Further improving the good-case latency in this paradigm, however, is nontrivial. If we allow the parties to vote before the $\Delta$ period ends, there may be honest parties voting for different values before they detect equivocation. Then certificates for different values will be formed since $f$ Byzantine parties can double vote, and honest parties cannot tell which is the value that has been actually committed.

In our good-case latency paper, we finally push the result to be optimal. Surprisingly, we discovered the tight bound is $\Delta+1.5\delta$, which is not an integer multiple of the delay bound. Our $(\Delta+1.5\delta)$-BB protocol is very different from conventional ones whose latency have always been an integer multiple of the message delay. Briefly, we describe the main steps of our $(\Delta+1.5\delta)$-BB protocol corresponding to the steady-state protocols from the previous sections.

Intuition. The novelty of our $(\Delta+1.5\delta)$-BB is to break the indistinguishability mentioned at the end of the previous section, by (1) allowing parties to early vote with a parameter $d$ that guesses all possible values of $\delta$, and (2) ranking the certificates by the value of $d$ (a smaller $d$ ranks higher). So in our protocol, though honest parties may vote for different values, only the one with the highest rank will win, and we will guarantee that the certificate for any committed value always has the highest rank. More specifically, we have the following claim.

If any honest party commits $v$ with paramter $d$, the our protocol guarantees that no honest party can vote for any other value $v’\neq v$ with a parameter $d’\leq d$.

Note: The $(\Delta+1.5\delta)$-BB protocol is purely theoretical as the message complexity is unbounded, and its purpose is to show the tightness of the $\Delta+1.5\delta$ bound. In fact, we can easily parameterize the number of votes in the protocol to achieve a tradeoff between good-case latency $(1+\frac{1}{2m})\Delta+1.5\delta$ and communication cost $O(mn^2)$. For practice, our $1\Delta$-SMR protocol is a better option, which has $O(n^2)$ communication complexity for the steady-state (same as Sync HotStuff) and near-optimal good-case latency of $\Delta+2\delta$.