Can we commit faster than a $\Delta$ time for some executions? Indeed. By using the notion of optimistic responsiveness! The work Thunderella introduced this notion allowing synchronous protocols to commit in $O(\delta)$ time when certain optimistic conditions are met. In their protocol, the optimistic conditions require an honest leader and $>3n/4$ honest replicas. They introduce a “slow-path–fast-path” paradigm with two distinct commit paths: (i) an optimistic fast commit path with a commit latency of $O(\delta)$, and (ii) a slow synchronous commit path with a commit latency of $O(\Delta)$.

Can we always obtain optimal latency independent of the conditions?

We answer this question in our recent work on the optimality of optimistic responsiveness. In this post, we will first explain what optimality means for the latency of an optimistically responsive synchronous protocol, and then provide protocols with such an optimal latency.

Lower bound on the latency of optimistically responsive protocols

Informally, our lower bound result says the following: There does not exist a Byzantine Broadcast protocol that can tolerate $f \geq n/3$ faults and when all messages between non-faulty parties arrive instantaneously, achieves the following simultaneously under an honest designated sender:
(i) (optimistic commit) a commit latency of $O(\delta)$ in the presence of $\max(1, n − 2f)$ faults,
(ii) (synchronous commit) a commit latency of < $2\Delta − O(\delta)$ in the presence of $f$ faults.

Informally, the lower bound says that the sum of latencies of these two commit rules should be at least $2\Delta$. This bound on latency holds when the following conditions are met:

The latency constraints described in the lower bound can indeed be obtained: our protocol commits responsively with a commit latency of $2\delta$ when the leader and $>3n/4$ replicas are honest, and commits with a latency of $2\Delta$ otherwise. The protocol works in the steady-state-and-view-change paradigm with a single leader until an equivocation or no progress is detected. A view-change protocol is executed to elect a new leader and ensure safety when the current leader fails to make progress. Our core consensus protocol in the steady-state is extremely simple, and can be described as follows:

This protocol is similar to the non-responsive Sync HotStuff protocol. The only difference is the presence of an additional responsive commit rule. In the protocol, a “bad event” implies a potential leader misbehavior such as detecting an equivocation or obtaining a blame certificate to overthrow the leader. Thus, a replica commits responsively when it receives a responsive quorum of votes, i.e., $\lfloor 3n/4 \rfloor + 1$ for cmd (responsive certificate) and has not detected bad events. Similarly, a replica r synchronously commits cmd if it does not detect a bad event within $2\Delta$ time after voting. In this case, replica r receives at least a synchronous quorum of $f+1$ votes for cmd (synchronous certificate). We note that a responsive quorum for cmd and a synchronous quorum for cmd’ does not necessarily intersect at an honest replica. Yet, our protocol maintains safety at all times when the corruption threshold is $< n/2$. 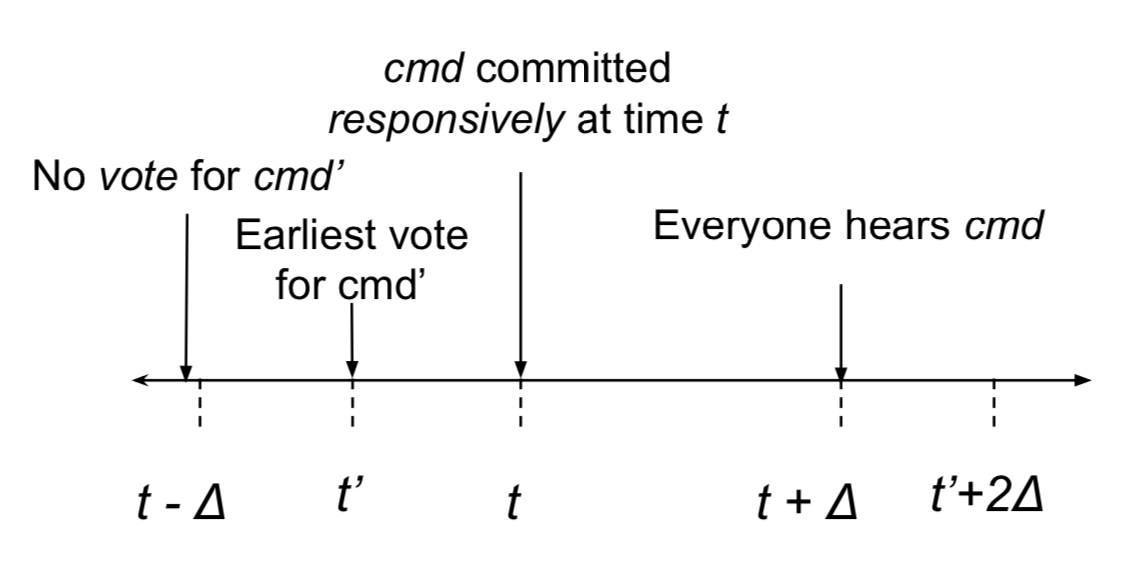 Remarks. In the paper, we present two additional protocols:

This is a joint work with Ittai and Ling. Read more about it here.