In this second part of the series on Encrypted Blockchain Databases, we are going to describe three schemes to store dynamic encrypted multi-maps (EMMs) on blockchains, each of which achieves different tradeoffs between query, add and delete efficiency.

Recall that a multi-map is a collection of multiple label/value tuples. In this construction, we store the values associated with each label into separate logical linked-lists on the blockchain. However, to guarantee confidentiality, we encrypt each value concatenated with the previous address, before adding it to the right linked-list. Precisely, given a tuple $(v_1, \dots, v_n)$ to be added to label $l$, for each $i \in [1, n]$, we add $Enc_K(v_i || r_{i-1})$ to the blockchain. For the first value, $r_{i-1}$ is the address of the current head of the linked-list of $l$. To achieve dynamism, we use lazy deletion, i.e., all the added and deleted values are marked as added (+) or deleted (-) and deletion is only performed at query time by removing the values marked as deleted from the output. Refer to Figure 1 for an illustration of LSX – for clarity, we omit the encryption of the values and addresses from the figure. 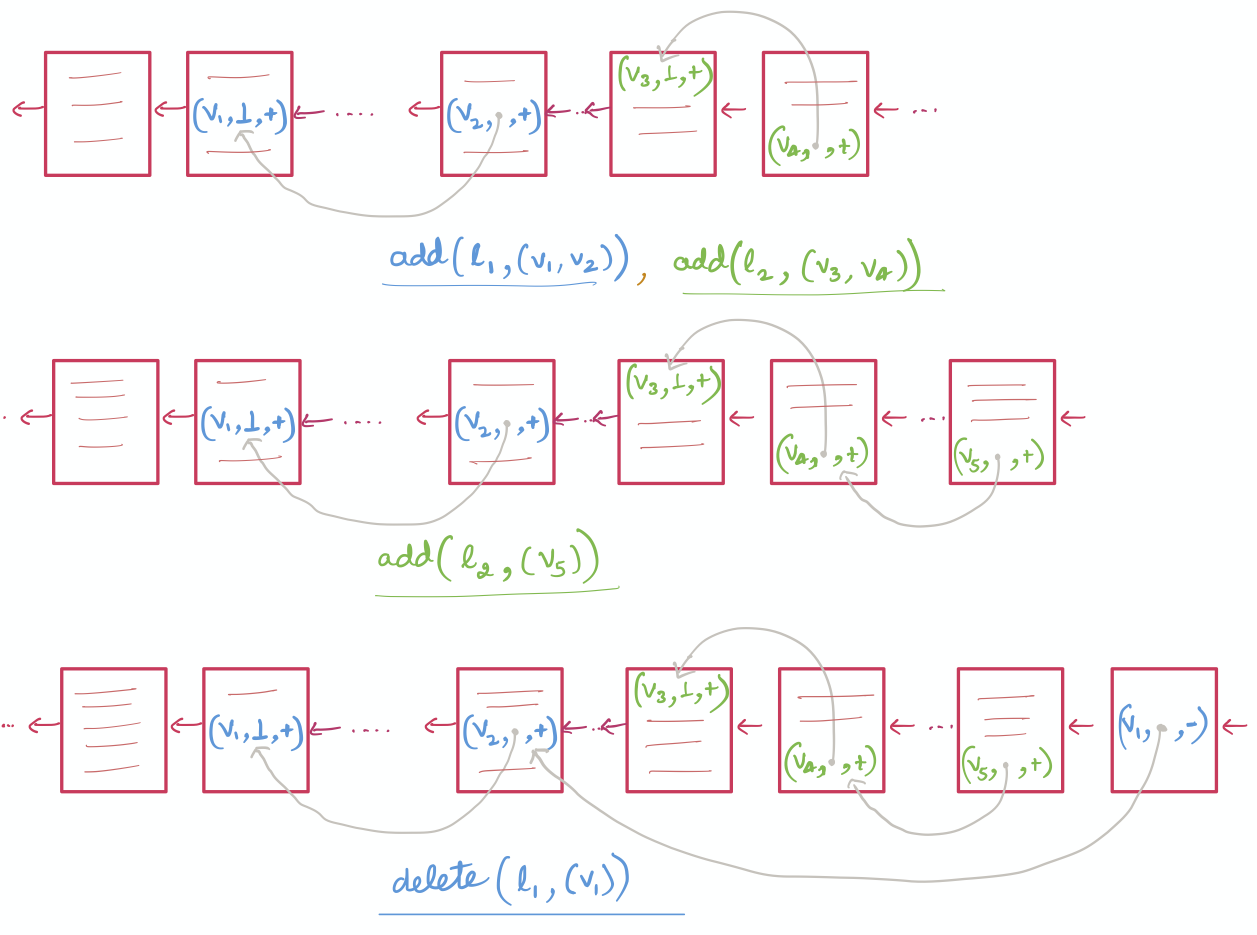 Efficiency. It is easy to see that LSX has optimal add and delete time complexity: for each operation, we only write as many values as the size of the tuple. However, its query complexity is linear in the number of updates. In particular, on every query, we read all the values that were ever added or deleted. If all update operations are additions, then this scheme has optimal query complexity, but if most updates are deletions, then the scheme incurs non-trivial query overhead. There is one more shortcoming of this scheme: both add and delete operations take a linear number of write rounds (in the size of the tuple) between the user and the blockchain. This is due to the fact that a value $v_i$ cannot be written until the address of $v_{i-1}$ has been computed and thus each value has to be written in a separate write round.

Counting the number of write rounds is important because blockchain writes take much longer than blockchain reads, due to mining and stabilization. It, therefore, becomes important to parallelize writes as much as possible. We call this metric the stabilization complexity, because the time it takes to write depends on the time it takes for a transaction to become stable – for example for Bitcoin, write time can be up to 60 minutes (a block has to be at least 6 levels deep in the chain to become immutable).

Next, we describe a tree-based scheme which improves the stabilization complexity from linear to logarithmic.

In this scheme, we modify the way the values are organized with the goal of reducing the number of addresses needed before storing a value. Given a tuple to add/delete, we super-impose a complete binary tree instead of super-imposing a linked list on the blockchain. This allows us to parallelize the insertions of all the values that are at the same depth of the tree. Furthermore, we also link the roots of the trees constructed across multiple add/delete operations. Notice that this simple structural change reduces the stabilization complexity from linear to logarithmic.

Since both the schemes described above have a query complexity linear in the number of values ever added/deleted – which can be terrible when most updates are delete operations – we now describe a scheme that improves the query complexity to be optimal but at the cost of making deletes a little expensive.

Notice that the query complexity of LSX is not optimal because we do not know the values that are deleted while traversing the linked list1, and hence we end up reading all the values, irrespective of whether they are deleted or not. To fix this, we super-impose additional data structures, called patches, on top of the linked-list. Patches are address pairs that will allow the query algorithm to skip deleted values. For example, suppose we have the following linked-list:

There are two issues with this:

We use another technique called copy on write to solve this dilemma. At a high level, the technique makes a copy of the “node”, and makes modifications to the copy instead of modifying the original node. We explain it with an example. Suppose that we represent the patch structure as a linked-list. Further, suppose that there are 100 patches $P_1 \ldots P_{100}$ in the patch structure.

Clearly, this is very expensive: deleting a patch that is very deep in the patch structure’s linked-list triggers all the subsequent patches to be re-written. Therefore, we instead represent the patch structure as a balanced binary tree, in which case a patch deletion only triggers the creation of as many patches as the height of the tree. 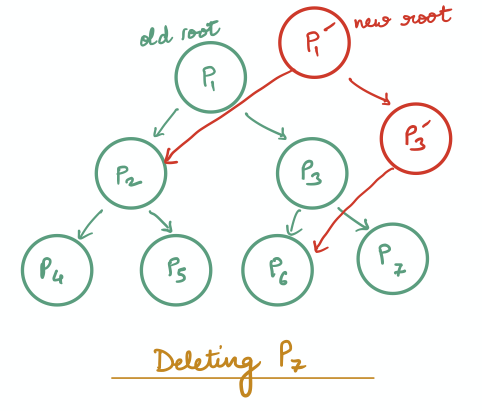 Efficiency. Let $|MM[l]|$ be the number of values currently associated with label $l$ in the multi-map. In other words, $|MM[l]|$ represents the number of un-deleted values for $l$. We will not argue it here, but it’s not hard to see that the number of patches in the patch structure is at most $|MM[l]|$. Since the query algorithm can now jump over the deleted values using the patches, and searching for a patch is inexpensive, the time complexity for query is $O(|MM[l]|)$, which is optimal. The complexity of an add operation is the same as before and hence is also optimal. The delete complexity is $O(|v|\log |MM[l]|)$, where $|v|$ is the number of values being deleted. This is because for every value that is deleted, a new patch is inserted in the patch tree and/or an old patch is deleted which takes $(\log |MM[l]|)$ time.

We discussed how to integrate end-to-end encryption in blockchain databases and, more precisely, ways to store end-to-end encrypted multi-maps on blockchains. Since multi-maps are expressive enough to represent key-value stores, this provides a way to store key-value stores on blockchains. We discussed three EMM constructions that achieve different tradeoffs between query, add, and delete efficiencies. There are however some open questions that would be interesting to answer.

Can we design a scheme that achieves the best of both worlds?

We also show in our paper that both LSX and TRX can use packing, which allows multiple tuple values to be stored in a single transaction. For blockchains that allow large transactions, packing can lead to large performance improvements. Unfortunately, our PAX construction does not support packing, so a natural question is

Can we incorporate packing in PAX?