The quest for building scalable Byzantine agreement has many challenges. In this post we highlight the 1982 Dolev and Reischuk lower bound.

In this series of posts we are revisiting classic lower bounds from the 1980’s. Most of them focused on deterministic protocols and computationally unbounded adversaries. Part of our goal is to provide a more modern view that also considers randomized protocols instead.

In our earlier lower bound posts, we discussed the limits on adversarial threshold (i) DLS, under partial synchrony, and (ii) FLM, in the absence of a trusted setup. In this post, we discuss yet another classic impossibility result on the limits on communication complexity in Byzantine Broadcast.

Dolev and Reischuk 1982: if there are $f$ corruptions, any deterministic Byzantine Broadcast protocol needs to send $> (f/2)^2$ messages.

Here’s the proof intuition: In any set of $f/2$ nodes, if all of these nodes receive $> f/2$ messages from honest nodes, then we have a protocol with $> (f/2)^2$ messages. So, if there exists a protocol sending fewer messages, there must exist one node, say node $p$, that receives $\leq f/2$ messages. Now imagine that all of the nodes sending messages to node $p$ (there can be at most $f/2$ of them) are corrupt. If these corrupt nodes do not send anything to node $p$, then it may output a value that is not the same as what other honest nodes output, thereby causing a consistency violation.

Now let us formalize this intuition to ensure that the remaining honest nodes do not send a message to node $p$ to help $p$ output the correct value. This may be possible, for instance, if node $p$ contacts all other nodes. We will prove the theorem by describing two worlds and using indistinguishability for all honest nodes. Here we go. 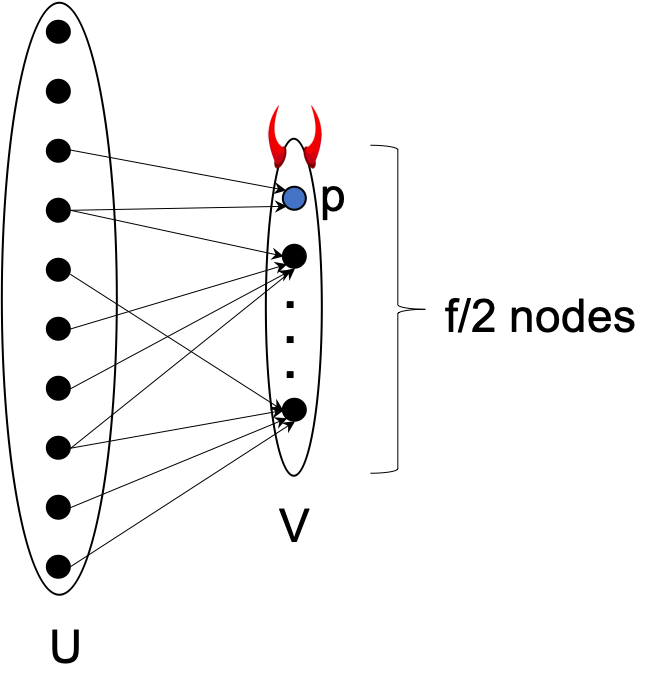 In World 1, the adversary corrupts a set $V$ of $f/2$ nodes that does not include the designated sender. Suppose $U$ denotes the remaining nodes. All parties in $V$ behave like honest nodes except (i) they ignore the first $f/2$ messages sent to them, and (ii) they do not send messages to each other. Suppose the honest designated sender has input 0. Then, for validity to hold, all honest nodes must output 0. 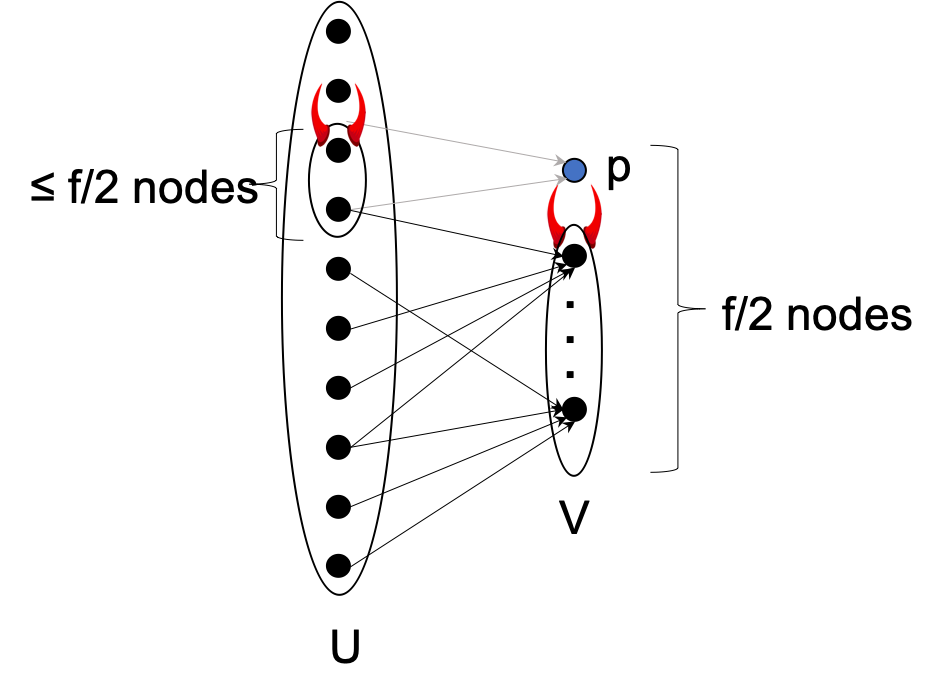 What do honest nodes in $U$ output in World 2? We argue that they will output 0. Observe that for the honest nodes, the two worlds are indistinguishable. Since the protocol is deterministic, they receive exactly the same messages in both worlds. However, since node $p$ does not receive any messages, if it outputs 1, then consistency is violated.

The lower bound uses the the fact that the protocol is deterministic. There have been several attempts at circumventing the lower bound using randomness and even against an adaptive adversary. Here are a few notable ones:

Randomized version of Dolev-Reischuk. Any (possibly randomized) BA protocol must in expectation incur at least $\Omega(f^2)$ communication in the presence of a strongly adaptive adversary capable of performing “after-the-fact removal”, where $f$ denotes the number of corrupt nodes.