The Fischer, Lynch, and Merritt, 1985 lower bound states that Byzantine agreement is impossible if the adversary controls $f>n/3$ parties. It is well known that this lower bound does not hold if there is a PKI setup.

The modern view of this lower bound is that it holds if the adversary can simulate $n+f$ parties.

The ability to simulate a polynomial number of honest parties is trivial with a traditional poly-time adversary (assuming no PKI setup). A key modern observation is that in the proof-of-work setting, an adversary controlling $f$ parties cannot simulate $n+f$ parties. So the FLM lower bound does not hold in these models. Indeed Byzantine Agreement may be possible even of there is no PKI setup (in the proof-of-work setting)!

When nothing is known, anything is possible Margaret Drabble

In our first post we reviewed the classic lower for Partial synchrony. That lower bound turned out to be very robust, it holds even against a static adversary and even if there is trusted PKI setup.

In this post we discuss another classic impossibility result. This time in the synchronous model. This lower bound shows that with $n \leq 3f$ parties, one cannot solve Byzantine agreement in the face of an adversary controlling $f$ parties. We show the version where $n=3$ and $f=1$.

Informally this lower bound captures the following: if there are only three parties $A,B,C$ and say $B$ and $C$ blame each other for lying and provide no proof-of-malice to $A$, then $A$ has no way to decide between $B$ and $C$. $A$ has no way to know who to trust and agree with.

Fisher, Lynch, and Merritt, 1985: It is impossible to solve synchronous agreement in a plain authenticated channels model if $f \geq n/3$.

The high-level approach to the lower bound will be similar to our previous lower bound. We will use two powerful techniques: indistinguishability (where some parties can not tell between two potential worlds) and hybridization (where we build intermediate worlds between the two contradicting worlds and use a chain of indistinguishability arguments for a contradiction.).

In the previous lower bound, we used messages delays due to partial synchrony to create the indistinguishability arguments. In this lower bound, we are crucially going to rely on the ability of an adversary to simulate different worlds and present different views of the worlds to different parties.

We prove this result by contradiction. Suppose there is a protocol that can achieve Byzantine agreement with three parties. We will define worlds 1, 2, and 3: 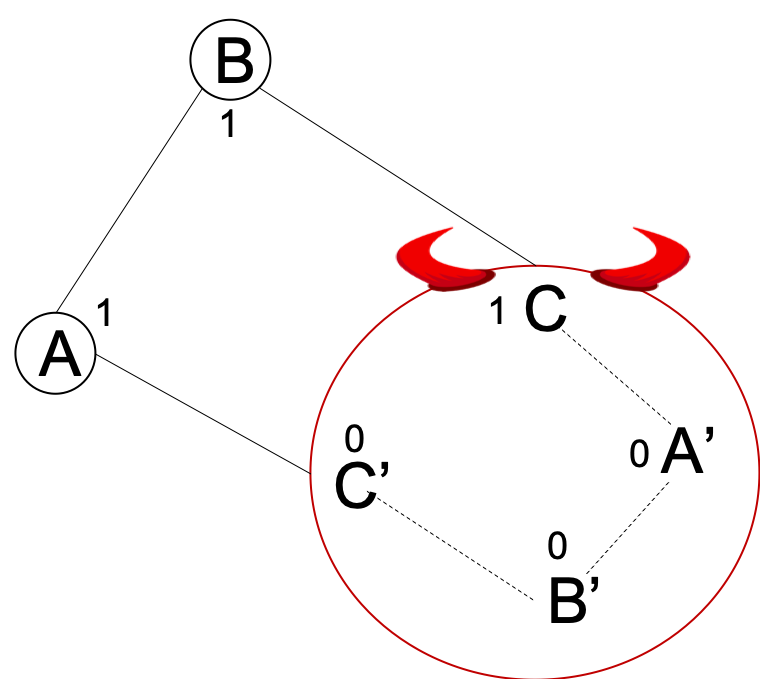 Now, since validity property holds despite what the corrupt party $C$ does, $A$ and $B$ commit to 1. 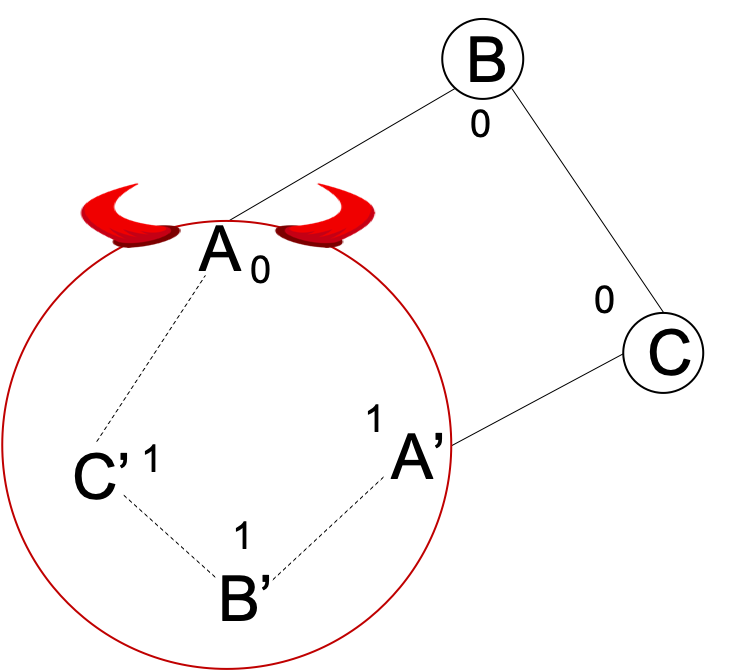 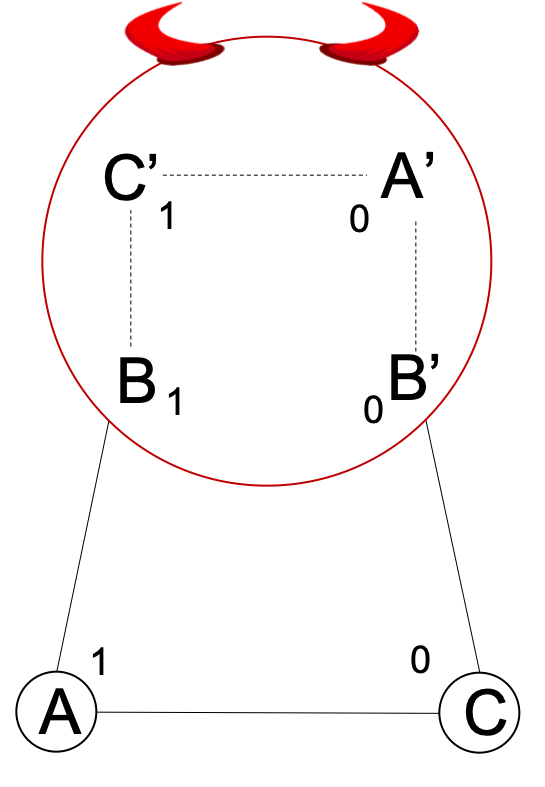 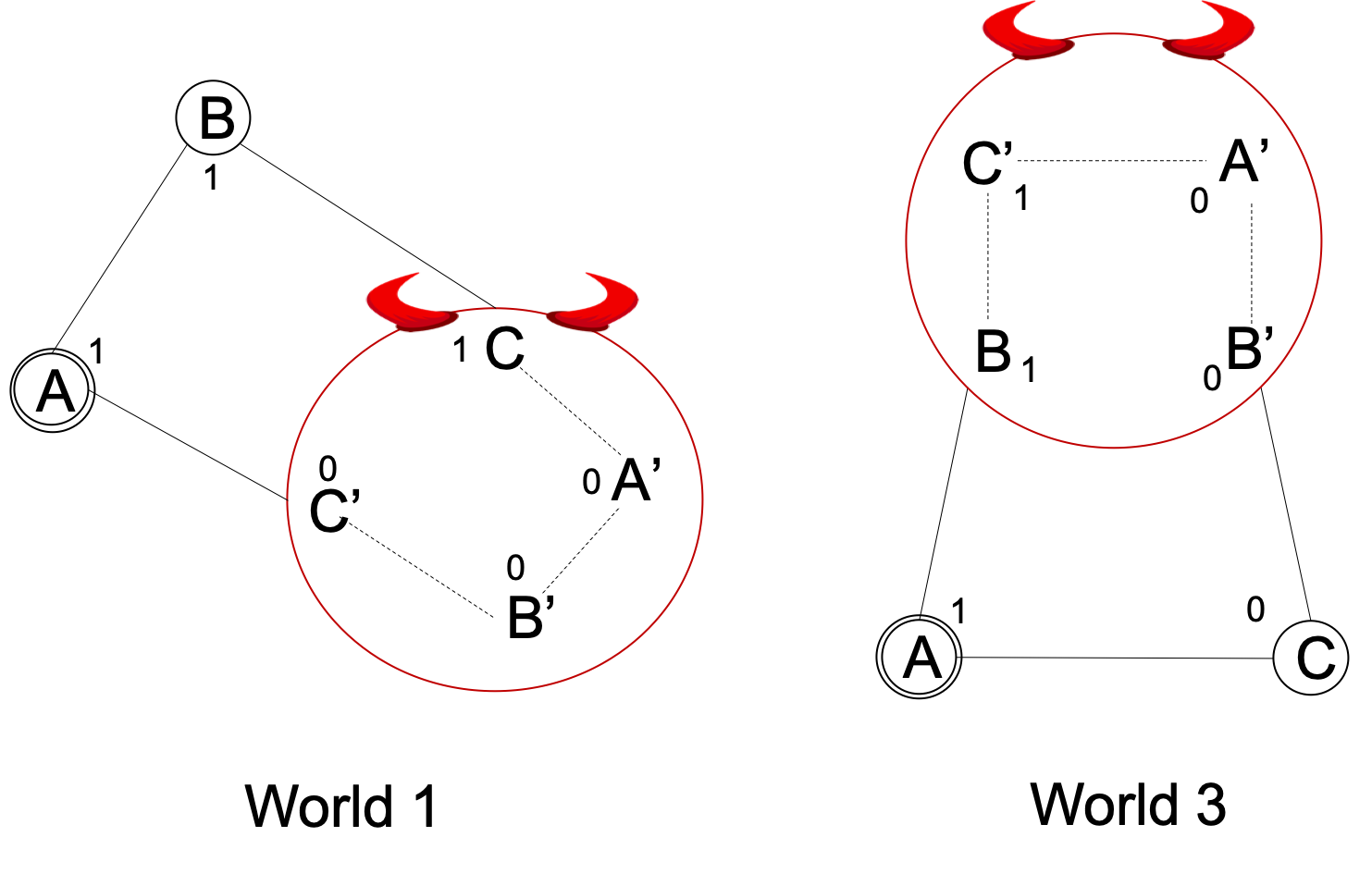 Observe that from party $A$’s perspective, World 3 is the same as World 1. From the figure, it can be seen that if we start from a double-circled $A$ and go clock-wise, the connections and inputs from parties are exactly the same. Intuitively, observe that in World 1, $C’$ started with input 0 and framed $B$ to have input 0 (the fully connected hexagon is necessary to make the argument more formal). However, $A$ decided to output 1 in World 1. Since party $A$ sees exactly the same set of messages in World 3, party $A$ outputs 1. By a similar argument party $C$ outputs 0.

Thus, if the validity property holds in Worlds 1 and 2, the agreement property cannot hold in World 3 (we cannot show absence of validity in World 3 since the honest parties started with different values).

Simulation of parties by the adversary

The main thing to observe is that the lower bound requires the adversary to simulate $4$ parties (in general, $n+f$ parties). So this lower bound does not hold if the adversary cannot simulate. Here are a couple of interesting cases:

The other thing to observe is that when the FLM bound holds, it holds in a strong way for randomized protocols, disallowing even protocols that reach agreement with a small constant probability of error. See the unpublished manuscript of KY.

[FLM 85 modern version] It is impossible to solve synchronous agreement with probability $> 2/3$ against a Byzantine adversary that can simulate $n+f$ parties if $f \geq n/3$.

Finally we note that this lower bound holds even for Broadcast, not just for Agreement.