In this post, we will cover Nakamoto’s Consensus protocol presented in the Bitcoin whitepaper. There are a lot of posts and videos that explain this seminal and simple protocol. Our goal in this post will be to intuitively piece out the need for different aspects of the protocol, such as proof-of-work and how network synchrony plays a role in the protocol.

The proof-of-work chain is a solution to the Byzantine Generals’ Problem. I’ll try to rephrase it in that context. Satoshi Nakamoto 2008-11-13

We are in the setting described in our state machine replication post where a group of $n$ server replicas known to each other agrees on a sequence of values. For simplicity, we start with reaching consensus on a single value. In the second part of this post, we will generalize it to multiple values.

In the following, we will describe a simpler version of the protocol to get an intuitive understanding of its core aspects.

Observe that there are two simplifications made in the above protocol. First, the input value is added only to the first block (a proposal). Subsequent blocks are empty (which act as votes). Second, we did not discuss how a unique leader is elected uniformly at random each round and how everyone knows that this replica is the leader. For now, we will assume that there is an oracle that provides us with this abstraction.

Let us understand how the protocol under some specific scenarios: 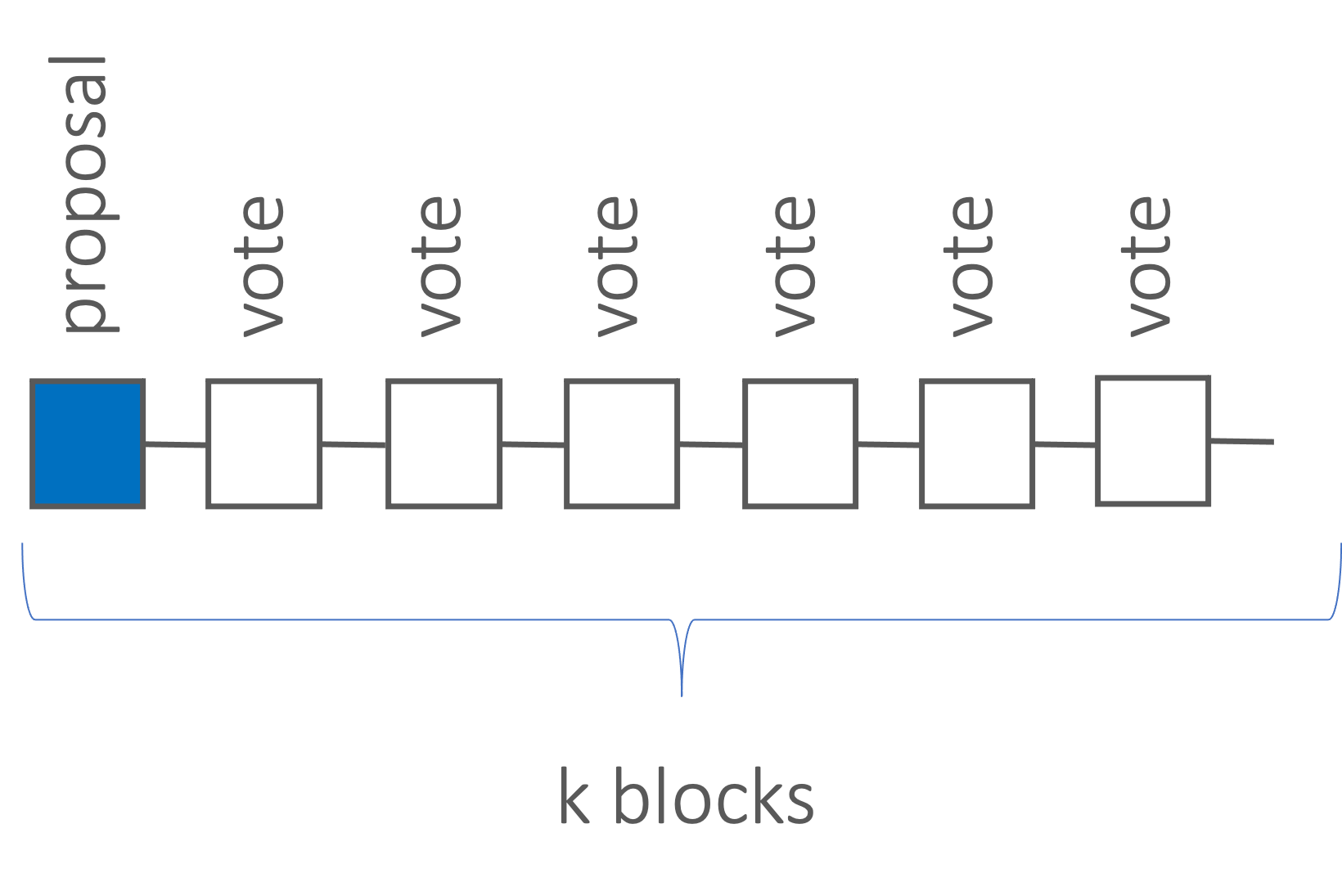 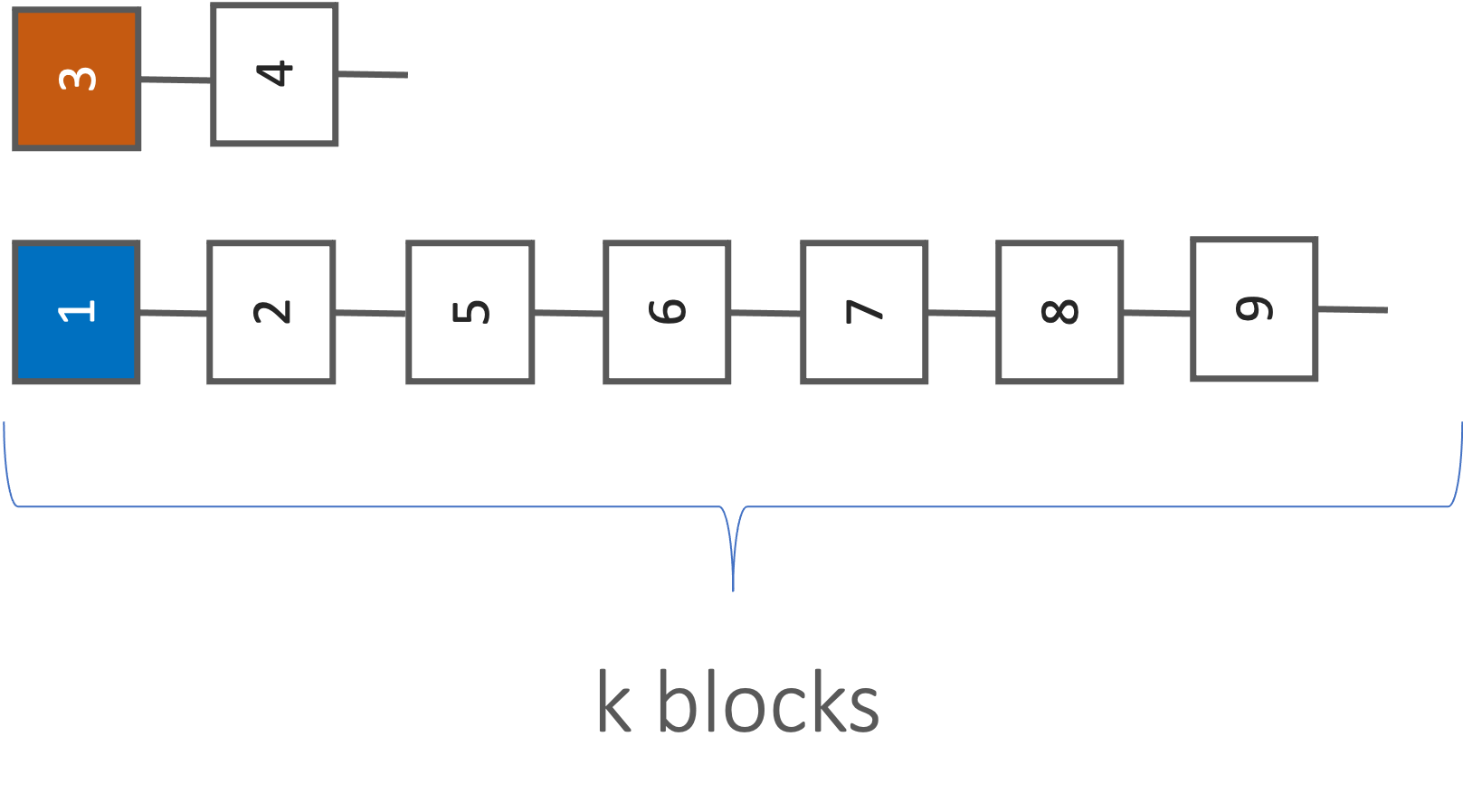 Here, the Byzantine leader in the third round started a different chain, with the first block having value v = Orange (or orange chain) even when a longer blue chain existed. Eventually, the blue chain was committed.

However, the order could have been HHBBBHHHH… resulting in the following chain. 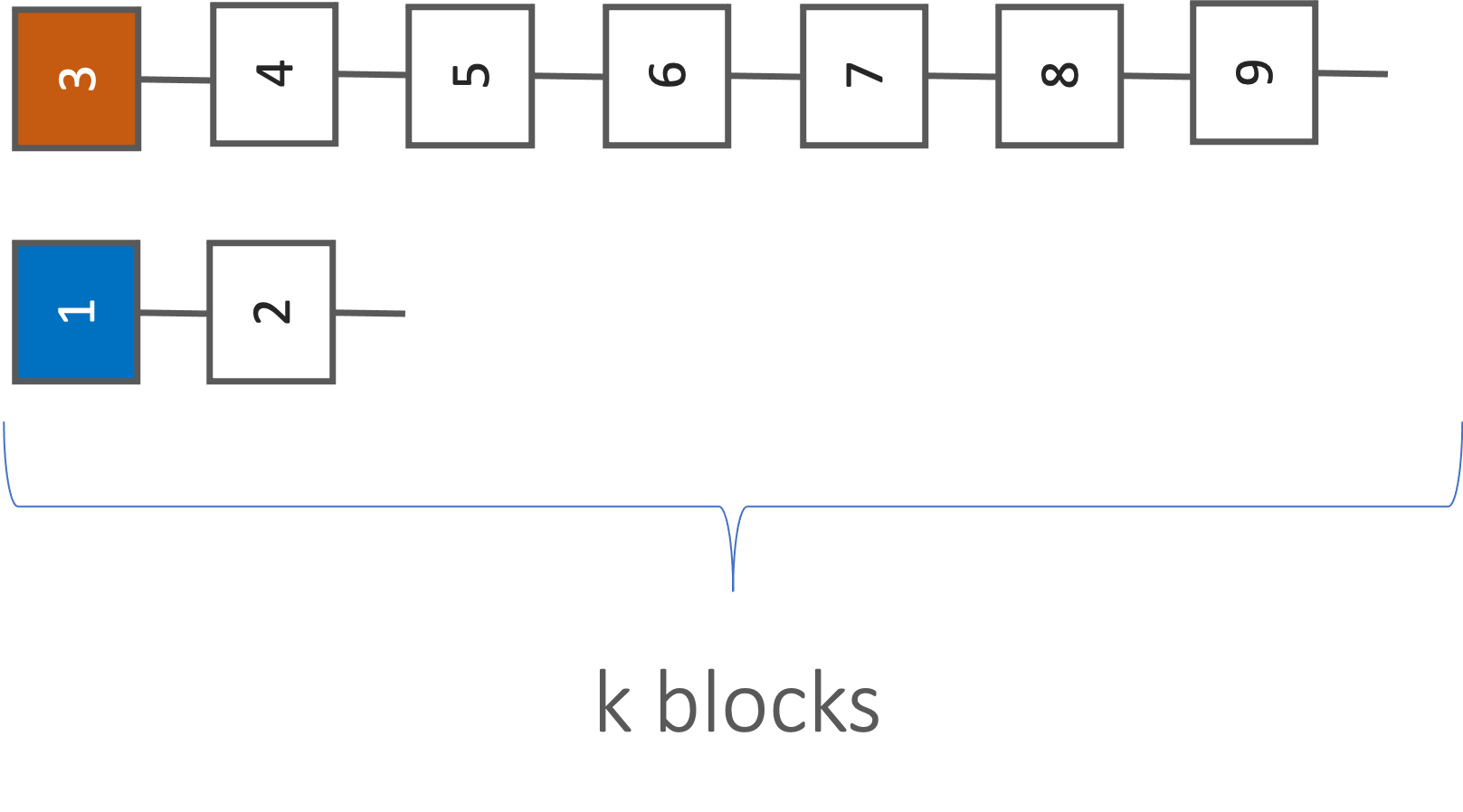 In this scenario, the orange chain grew longer, and eventually, all replicas committed value v = Orange. It is important to stress that, from a consensus standpoint, all honest replicas have still committed the same value. Thus, we have safety and liveness so far as the orange value is a valid value (as per some validity rule).

However, when we achieve consensus on many values instead of just one, a situation where the fraction of Byzantine values committed is higher than the fraction of Byzantine replicas in the system is not ideal. For instance, if all blocks committed are proposed by Byzantine replicas, then we have concerns such as censorship, fairness, etc. This ratio of honest blocks to the total number of blocks is also referred to as chain quality. Ideally, we want this ratio to be the same as the fraction of honest replicas. The attack described here will not yield a worse chain quality. However, there exist other attacks to worsen chain quality, e.g., selfish mining attack (described in an earlier post).

Observe that if the Byzantine replicas do not show a chain to honest replicas, an honest leader in the third round can start a new chain instead.

Thus, for a sufficiently large $k$ (security parameter), a private chain attack by Byzantine replicas does not succeed against Nakamoto’s protocol so far as they are in minority. This was shown using some analytical evaluation in the original Bitcoin whitepaper. We should caution you that this is not a proof of security for the protocol – it is just a security argument against one of the attacks. A proof (of the more generalized version of the protocol) has been shown by GKL’15, PSS’17 and more recently by Ren’19 (with an accompanying blog post). Having said that, it has also been shown recently that a private-chain attack is indeed the worst attack possible when there is no network delay.

From single-shot consensus to consensus for multiple values

How do we commit more than one value? Of course, an option is to have multiple values in the same block. But note that we cannot have all values in one block due to arrival of values at a later point such that they depend on previous ones. Thus, committing multiple blocks is necessary for any SMR system. Nakamoto achieves this by pipelining this process in an intuitive manner: each block acts as a proposer for a value (or values) and a vote for all the blocks that precede it. So, there is a genesis block, with only one longest chain that extends the genesis, and every block plays both roles in this longest chain.

A block can be committed if it is on the longest chain starting from genesis and if at least k blocks extend it. Thus, the commit latency for each block is still k. Due to pipelining, a block is committed every round (or a constant number of rounds in expectation). Since all blocks are now connected to the genesis, the notion of creating a new chain by a Byzantine replica is now replaced by a fork from the longest chain.

Permissionlessness, proof-of-work, and need for synchrony

Earlier, we made several simplifying assumptions: 1. there is a fixed number of replicas that know each other, 2. there is a well-defined notion of rounds, and 3. there is a leader election oracle that uniquely and verifiably identifies a leader uniformly at random. Given our basic understanding of the protocol, we will now either relax these assumptions or learn how to realize these oracles.

Permissioned vs. permissionless. The notion of having a set of replicas that know each other is called the permissioned setting. In effect, any replica that needs to join the system requires permission to be a part of it. Bitcoin works in a more generic setting where any replica can leave or join the system at any point in time. Moreover, the replicas do not have any identity associated with them – all replicas are pseudonymous. Yet, the expectation is that the protocol still provides us with safety and liveness guarantees. This setting is referred to as permissionless, and it is strictly harder to design permissionless protocols.

Since replicas can join at any time and replicas do not have identities associated with them, an adversary can masquerade itself as many replicas, also referred to as Sybil replicas. Given our leader election protocol, this is concerning: if elections happen uniformly at random, almost all elections will be won by (a Sybil of) the adversary. It can then always pull off a private chain attack described earlier, leading to a safety violation.

Resource constraints and proof-of-work. Nakamoto consensus solves this problem by making an additional assumption that relates the computation power of honest and Byzantine replicas and uses the computation power to determine leaders. Specifically, the protocol is only secure so far as the honest computation power is more than Byzantine computation power. To elect leaders, all replicas engage in a continuous randomized competition that depends on the number of hashes they can compute at any time. The winner of each iteration of this competition needs to present a proof-of-work (explained in more detail in this post). The process of finding the next block is also referred to as mining; hence, the replicas are referred to as miners.

Thus, an updated version of the protocol looks like the following:

Proof-of-work provides us with a verifiable unique leader elected uniformly at random in intermittent intervals (earlier referred to as rounds). Well, almost! It turns out that, when parameterized correctly, we achieve these properties with high probability. But in some cases, the uniqueness property does not hold. Why? Each attempt at finding a proof-of-work for the next block involves computing a hash function based on random input (nonce), and thus this process is memoryless (i.e., success in an attempt does not depend on previous attempts). Thus, the arrival rate of the next block in the entire system is governed by a Poisson process, and we may have two replicas (both of them potentially honest) who mine a block within a short time interval. If this time interval is short enough that the replicas do not receive each other’s block, we have an honest fork in the system. Observe that this fork exists purely due to a delay in the network. This is why Bitcoin is parameterized to produce a block every ten minutes – this ensures that honest forks are rare. On the other hand, protocols such as Ethereum generate blocks faster and observe a higher honest forking rate. Honest forking rate reduces the effective computation power of honest replicas, which was shown quantitatively in a previous post. A graphical illustration of the relationship between the two, shown below, was plotted by DKT+19 in their analysis.

This also explains why a synchrony assumption is critical for Nakamoto consensus. Once an honest block is mined in an asynchronous or partially synchronous network, it may not arrive at any other replica, leading to forks (even without Byzantine participation).

Acknowledgment. We would like to thank Ittai Abraham and Ling Ren for providing feedback on this post!